New Zealand is one of Australia’s nearest neighbours and our links go back to the ANZAC tradition and before.  Regularly referred to as across the ditch, New Zealand is a few hours flight from Australia and one of the greatest places to go for all sorts of reasons.

Showcased by New Zealand director Peter Jackson in the trilogy Lord of the Rings and again in The Hobbit New Zealand is spectacular in scenery, rich in history and Maori culture, is home to the best sauvignon blancs on the planet (just my opinion but I haven’t tried a Marlborough sav blanc I haven’t liked) and home of the adventure and adrenalin junkies best fixes.

Auckland is the largest city and main gateway, but Wellington in the south of the North Island is its capital.   Auckland is on two harbours and water sports are a way of life.  Take a ferry across the bay and explore a local village neighbourhood.  Take a sail on an America’s Cup boat.  Explore the city on the morning tour and climb an extinct volcano.  Adrenalin seekers can try the Auckland Tower.

North of Auckland is the Bay of Islands area.  Check out the dolphin cruise from Paihia or Russell and view the Hole in the Rock as well as some very upmarket homes.  While in this region visit the Treaty Ground and explore historic Russell, on a island a three minute ferry from Paihia and if you enjoy a walk and don’t mind a bit of a climb, the views from the lookout are spectacular.

Check out the glowworm caves at Waitomo south of Auckland, and make time to visit not just the main cave, but one of the other two as well.  Two Dogs cave is fascinating as is the history of how they found the cave ( the hint is in the name) and there are glowworms here too.

Rotorua is the centre for Maori culture.  Enjoy a hangi and savour superbly cooked food done in a traditional earth oven – yum.  Visit the thermal centres in the town and also nearby.  See the world the way it was when it was young – New Zealand is relatively young and still quite geothermically active. 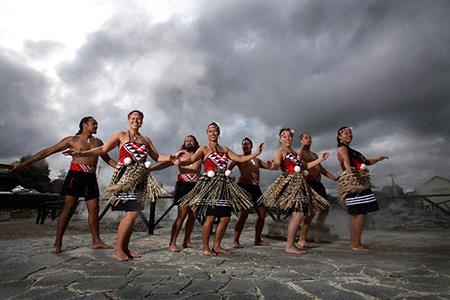 Let the cares of the world wash away in the hot springs and have a mud scrub and massage for relaxation and rejuvenation.

Lake Taupo is the largest lake in New Zealand is there is permanent snow nearby.

If architecture is of interest to you it is worth the drive ( but fill up in Lake Taupo because there are no petrol stations on the road) to Napier on the east coast.  Devastated by earthquake in 1930 the city was rebuilt in Art Deco style and the walking tour is absolutely worth doing.  South after lots of very rural scenery – extremely contented cows and sheep –  is the town of Marlborough, a wine making area worth a look.  If you take the first signpost to the wineries you won’t find the wineries, but you will find a New Zealand quirk – their version of Stonehenge for the southern hemisphere.

Over the pass and south to Wellington.   Capital, affectionately called the windy city,  it is home to a fabulous museum, a sweet little zoo and great views from the cable car top station.  It is quite hilly so be prepared for some climbing or use the lifts that go up the hill usually found in shopping malls.